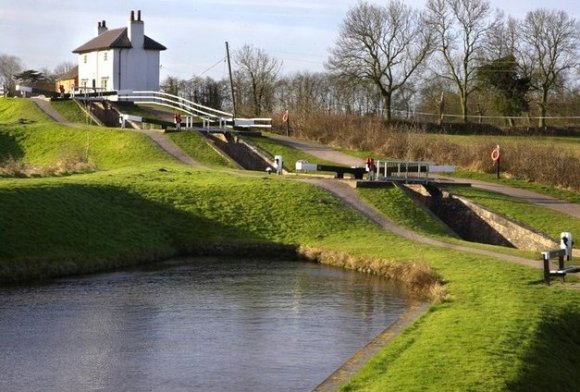 Watching the boats negotiate the locks is a spectator sport, and is often very entertaining. When Benjamin Bevan was given the job of designing locks at Foxton he faced two major problems. The first was water, which was in short supply on the 20 mile summit pound of the canal. The second was the steep escarpment which he needed to use to get the canal from one level to the next. He combined solutions to both problems.

The water is controlled by paddles painted red or white. In effect they are big taps, turning the water on or off. Red paddles fill locks, white empties them. A past lock keeper chose to paint the paddles red and white to make it easier to explain the operation of the locks. He summed it up with "Red afore white and you'll be alright, white afore red and you'll wish you were dead!" Get the sequence wrong and you risk flooding the pub.

The canal was known as the Grand Union (old GUC) and formed a link between the Leicestershire & Northants Union and the Grand Junction canals (GJCco), taking traffic between Nottingham, London and all places in between. Ten locks were constructed at Foxton and seven at Watford (Watford refers to Watford Gap in Northamptonshire and should not be confused with Watford in Hertfordshire, which has wide locks). Because the Grand Junction Canal company banned wide boats and barges from its tunnels, the Act of Parliament for the old GUC permitted the construction of narrow locks, but stipulated that, in the event of the GJCco removing its ban and promoting its use by barges, the Old GUC would have to widen its locks to accommodate the barges.

The lock flight at Foxton was built in 1810, and the top summit route opened four years later. A trip through the ten locks takes about 45 minutes to ascend/descend the 75 ft rise. The ten locks consist of two "staircases" of five, located on the Leicester line of the Grand Union Canal, about 5 km west of the Leicestershire town of Market Harborough. They are named after the nearby village of Foxton. Staircase locks are used where a canal needs to climb a steep hill, and consist of groups of locks which open directly into each other. Foxton Locks are the largest flight of such staircase locks on the English canal system. Side ponds provide reserves of water for the locks, prevent wastage and speed up traffic.

With the decline in traffic, and lack of investment, caused by improvements to the railway, the coming of the motor lorry, and the move from coal to other forms of power like gas and electricity, the canal companies were struggling. The lift closed to traffic and was mothballed in 1911. We think it needed major repairs, probably new cables. The company said that they would reopen when things got better.

All traffic went back to using the locks. They struggled on but the 2 World Wars had left a big backlog of maintenance, and many of the workforce never returned to the canals. The canal traffic was dwindling and the canal was in a poor way, but never actually closed. The First festival of boats was held in Harborough in 1950, this heralded a push to keep our canals going, and leisure use crept in to take over.

Work on the locks started in 1810 and was officially opened 4 years later in 1814. With horse and cart as the only competition the canal plodded on but never gained the bulk coal traffic it was looking for. The looks look very similar to what they did in 1814, with the addition of the lock bridges, which came in later after a boatman fell from a lock gate when trying to cross over.

The coming of the railways

The development of the railways prompted the building of the Foxton Inclined Plane, to replace the locks, widen the canal, and save water.

By 1897, the Grand Junction Canal Company had acquired several of the canals comprising the Leicester line, and was keen to meet demand from carriers seeking to use wider beam (10 ft) craft, rather than the traditional narrow beam boats, which were the only type the locks could accommodate. Their solution was to build an inclined plane to the side of the locks. Initially, the company had planned for the plane to replace the locks, rather than having it act as a second, faster option. Construction began in 1898 and was finished by 10 July 1900.

The lift was partly built on top of the side ponds of the locks. This reduced the size of the middle side pounds. While the inclined plane was in operation the locks were allowed to fall into decline.

Fellowes Morton and Clayton the biggest carrying company wanted to run steam boats through the night on what is known as a fly run, nonstop 24 hour a day boating, allowing them to compete with the railways. 1908 the committee released £1,000 to bring the locks back into full (nightly) operation.

With only the horse for competition the 45 minute journey (for each boat) through the locks was unimportant, even when queues extended this to several hours. By the end of the 1900s the canal was in poor condition and, with the with the coming of the railways, competition was starting to bite. Fellowes Morton & Clayton (FMC) wanted to use bigger boats to take coal from the north to the London factories. They promoted a takeover by the Grand Junction Canal Company. Steam tugs had been installed in the GJCco tunnels and wide boats and barges were now to be used.