The church is built on high ground dominating the village and is visible for a considerable distance.

Medieval churches like ours were not built all at once in a single year. They grew and developed over a period of centuries.

There is evidence of a Saxon church, probably as early as 850AD when monks (probably from Daventry) chose the site as a centre for religious life of what was then a primitive Saxon community. Here they set up a stone cross as the focus of their ministry and the shaft of this Saxon Cross standing near to the blocked up south doorway of the Church is by far the oldest part of the church.

Later, a small wooden church would have been built on the site, and perhaps a later one in stone. There was certainly a church on the site by 1086 because Domesday Book mentions a resident priest in Foxton.

In 1109AD – just forty-three years after the Norman Conquest – Robert, the Lord of the Manor, gave away the rectory of the church to the Priory of Daventry. This meant that the monks became the owners of the 'greater tithes' (corn and wool). One of the monks was appointed vicar and the 'smaller tithes' (live-stock, poultry, fallen wood, fruit, wax and honey) were for his living. Robert had doubts about the generosity of his gift after a few years and revoked it. Still later, in great humility, he re-conveyed the rectory and ratified his act with a charter. Nicholas, then Vicar of Foxton, witnessed the Deed. A translation of the Deed can be read in a frame near the church door.

One of the most interesting features of the church is the very fine Norman Font, dating from the middle of the 12th century. In this font, babies and adults have been baptised into the fellowship of Christ's church for over eight hundred years.

The present Church was built of ironstone and in stages: the chancel and lower part of the tower from 1200-1250; the aisles and porch 1350-1380; the present nave and upper stages of the tower about 100 years later. The Church went through several periods of neglect, the last being in 1890 when the whole building was restored at the substantial cost of £2,750 which is about £350,000 in today's money. All the Church fittings date from this Victorian period.

Besides the Saxon Cross and Norman font, other survivals from the Middle Ages include a Leper's Window, a medieval Piscina which is used at Mass for the washing of the priest's hands and communion vessels, the stairs leading up to the destroyed Rood Screen (Christ on the Cross) and the old clock which is the same age as the original 17th century four bells. The Church Registers date back to 1653 and contain the complete record of Foxton baptisms, marriages and funerals from that date.

RESEARCHERS PLEASE NOTE: There is a comprehensive history booklet available to purchase in the Church, and available for free download at the base of this page.

The Leicestershire & Rutland Churches website carries some useful additional information about St Andrews and you can access that here. 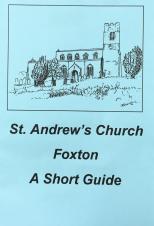